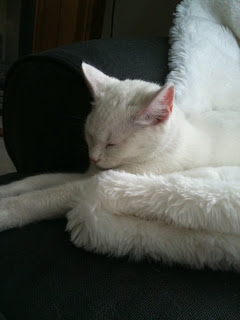 As the owner of 3 dogs I really never thought I would have a cat. Cats are for lesbians and old ladies. (at some point I will be able to make generic jokes without having to follow them by quotations to explain that i am not being mean but funny). So back to the cat.
A couple of months ago I was sitting in my living room with my parents when the doorbell rang. Now, normally when the door bell rings I do that instant fall to the floor and try and crawl out of sight while I make faces at the dogs to stop barking because it is probably the Mormon's or some kid selling chocolates. I mean if anyone really wanted to come see me they would text me first so honestly I never answer the door. However, as my parents were sitting on my sofa and were staring out the window into the face of the lady at my door I had to go and answer it. I hate answering the door!  It is never good news. It will either end up with me having to spend money I don't want to spend, or having to lie to a religious person about something not really burning on the stove. This time was different.
A pretty lady with the sun shining off her over processed hair asked me if I owned the cat across the street under the truck. I was about to say no, then i looked over and saw Pussy Lush.
She was this tiny, skinny little runt of a kitten with rainbow coloured nails. It was like a sign from the gay gods. I answered her simply "I do now." And thus Pussy Lush came into our house with 3 mental dogs, an allergic human and me. The dogs we immediately chased into their kennels so Pussy Lush could sniff her way around in peace.
My mother instantly tried to claim her stating that Darren was allergic to her and that we could not have a kitten with 3 dogs. She went on to say that she was just going to take her and that I should not get attached. As I usually do with my mom, I blanked out her foolishness and instantly fell in love with my Pussy.
She was so cute, her fur like a bunny and those little coloured nails. Then I stopped and realized, somebody had to own her; Somebody had to be worried. Reality hit me and Darren stated that we had to find her home. He was, after all allergic to cats and he would be in misery the longer she was around. I supposed I had to find her home. The next day as I went to work I told Darren to check online and see if anyone is looking for her and to call the local shelters. I insisted that he not give any details to ensure that some other queen didn't steal our clearly gay pussy who didn't have the right to have her. Halfway thru my day at work I got a text from Darren stating he found the owner! I dropped everything and phoned him for the details. He said that the shelter's info was sketchy but they gave him a name and address and Darren had left my name and number with them! I panicked! I was going to lose Pussy Lush. I told him not to do a thing until I got home.
I raced home that evening and found Pussy Lush romping and playing with the 3 dogs. How sweet. the family was complete. I drove to her "alleged" home and was horrified. the house was derelict, the grass overgrown and cats were all around.
How could Pussy Lush come from this place?
How could such a dump be so close to our house and I not know it?
Finally, how could I return her to this?
So, like all responsible parents and pet owners, I kept her. Thats right. She is mine. I have the sweetest gayest kitten in the world and her nails are now a beautiful teal blue and she loves it. She adores her new home and her bothers and sister. She is as happy as can be and Pussy Lush is home. As far as I am concerned Pussy Lush lucked out! I mean, being a clearly gay cat and falling into the hands of 2 gay men was fate.
Sidenote: Guess who is not allergic to cats after all? Just saying.
The one time I answer the door there is a gay cat on the other side. That is fate people.
Last week Pussy Lush had a seizure and we had to rush her to the vet. She was ok but we had to run into a vet clinic with a cat with acrylic nails, named Pussy Lush. Indeed we did. Thats the kinda gays we are. Shameless.
So Pussy Lush is as much apart of this family as my mother or beautiful daughter. She leaves her filthy little paw prints all over the glass tables and she goes through more toilet paper than Darren after his mom's chile.
She's here. She's queer. Get used to it.... and she is kinda stolen. Rescued! I mean rescued! ;)
Posted by Jay B Lush at 13:05