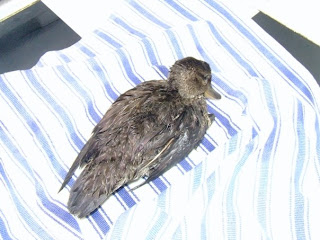 One evening a few summers back, I was driving to pick up Kennedy and take her to the Avril Lavigne concert that was playing that night at Mile One Centre here in St. John's. As I drove across town it began to rain. Those summer rains are often refreshing and much needed but this one was particularly aggressive. The rain was falling faster than my wipers could keep up with and I found myself squinting through the glass trying to see the road before me. Suddenly I saw a dark figure fall from the sky. This small dark blur was then frantic on the road. At first I could not really rationalize what I was seeing. What was it? Then it was clear. In front of me was a little duckling with his broken little wing dragging behind him trying to dodge between the cars whizzing by him. Instinctively I maneuvered my car to block off all lanes of traffic, jumped out and proceeded to chase the little duck until I was able to scoop him up and and safely carry him back to my car.
Now what? I had this little dazed duck in my arms, in the middle of the road during a blinding rain storm. I began to drive. Kennedy was waiting for me and this concert was long anticipated by her for months.
I went into her house with this little duck in my arms and got her mom to make me a bag of popcorn and get a bottle of water and the old cat kennel we used to have. This little duck, that Kennedy named Dexter, would rest for a bit, have a snack and some water until we got back from the concert and then I would see what I could do to make him all better.
That night Avril was amazing and Kennedy and every other tweeny girl in that crowd screamed and squealed to every song. All I could think about was Dexter. Would he be okay when I got back to pick him up? Would I be able to find help for him on a Saturday night?
Prior to my experience with Dexter I had a serious aversion to birds. To me they were simply reptiles with feathers and I was creeped out by all sorts of flying critters. Flight seemed unnatural to me and I did not trust them as far as I could throw them. But Dexter was different. He was calm and trusting. He was innocent and lost and he needed me.
After the concert we raced back to Kennedy's house where Dexter was waiting patiently. He had eaten some popcorn and certainly gained the attention of Kennedy's cat. In the protection of his kennel he seemed to recognize me and seem relieved when I picked him up to bring him home. I drove home with dexter on my lap as I stroked his little head and dreamed of a life with a pet duck. Joey and Chandler did it on Friends so why couldn't I? I mean it is not like he was a wild duck. He was just a baby and maybe I could teach him to use a litter box and maybe even fly around and then come back home like an outdoor cat always does. All kinds of thoughts raced through my mind on that ride back home.
When I returned home I got to work. Immediately I google how to bind a ducks broken wing. Google gave me expert instructions on how to hold him, wrap him, tape him and and tend to him. I contacted a friend whose father was a veterinarian and she told me that I could bring him to her father's clinic the next morning at 7am and he would take care of Dexter.
I placed dexter in the bathtub that I had carefully filled with cool water. I laid out all of the material I would need to help him. I had the gauze, the tape, an antiseptic to help with the cut on his head and of course I had a whole lot of love for this little duck floating in my tub. He swam around in circles. His little webbed feet gently paddling him around propelling him from one one the tub to the other. Once he had that little swim I decided it was time to take care of that wing. I was not sure if it was going to hurt him or not so I held him close and told him that everything would be over soon and then we would go watch some TV. With my laptop on the floor beside us I set his wing back and wrapped it just as the website instructed me to do to. I cleaned up the little cut on his head and I wrapped him in a towel and brought him to to living room. As promised, I turned on the TV and we sat there together and watched TV. 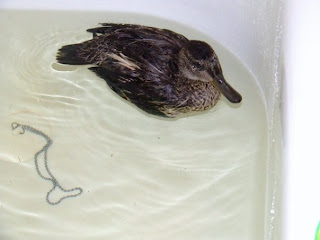 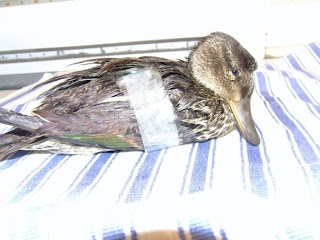 We talked and decided what show to watch and we ate some popcorn. He seemed so content and peaceful. He seemed to genuinely enjoy the bonding time we had. He was sitting quietly on my lap, happy that he was not alone under a bush afraid and bleeding in the rain. He was with me and he was loved.
As my mind moved forward into the thoughts of our life together as duck and dad he started to twitch a bit. I thought I should loosen up the tape in case it was too tight and cut the edges to give him that little bit more comfort. I asked him how that felt, his little head looked up and gazed right into my eyes and his little head fell limp. After our 4 hour bromance he died in my arms. He looked at me that last time and let go.
I was devastated. I was horrified. I was alone. This little duck laying lifeless in my lap had given me such joy for such a short period of time but the experience as a whole changed me.
I cried that night like I had lost a pet of 20 years. I felt guilt like I had killed him and I felt peace like I had given him a few hours of love and comfort before his inevitable death. A life is a life and his was no different than mine. I was so sad that for a brief moment I swore that never again would I help a soul. It was too painful. I was mad that he had died. I was mad that I was feeling such pain over the death of a little strange duckling.
Dexter was more than duck. He was a reminder of the love that we as humans can have for all life. His short life and quick death reminded me of all that I loved and lost. He reminded me that no matter how short the time is that we have with someone that we can indeed feel love and loss. He was one of the greatest lessons of my life.
I picked up Kennedy the next morning and we both cried I as I explained to her that Dexter had died. Her broken little heart made mine bleed. We sat in the car with tears running down our face hugging and sharing our thoughts. We both loved Dexter. We both thought Dexter needed a special place for his final rest. We drove around for a while discussing what would be best and most fitting for a duck that fell from the sky into our arms.
We found ourselves in Outer Cove, a beautiful little Hamlet on the eastern edge of this awesome island that all three of us called home. We walked toward the edge of a cliff and I instinctively launched little dexter into the sky and over the edge of the earth and into his afterlife. At that very moment and flock of ducks flew low over our heads crying their cries as they passed over us and over the edge. It was magical. Kennedy and I cried tears of happiness as we knew what we had accomplished. Dexter was most definitely at peace and to this day I like to think that the flock of ducks that flew over our heads was his family taking him to where he needed to go next.
In a matter of hours Dexter sent from flying freely in the sky, to hitting a telephone wire and crashed to the earth in an abrupt thud. His fate was sealed in that moment but mine wasn't. I made a choice that evening to save him and although I did not save Dexter that night, he in turn saved me. He renewed a faith in me that I thought I had lost and he made me know that love is more the a feeling, it is a power that we have no control over. Dexter was a gift from that power in the sky. He was a gift from love. He was a gift of love. He was love in the form of a duck. 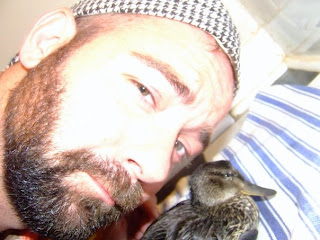