My Nan is my Jesus 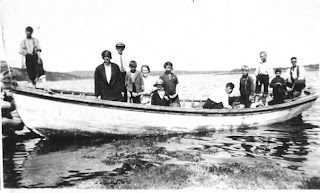 My youth was essentially shaped by the Catholic Church. As a child, an alter boy and young man this was a comforting presence in my life. It was not only my faith but it was the basis of every school lesson, every experience and everything thought I had growing up.
I really don't now what the church is up to these days but I do know that in my day they had me thinking of a life in a very specific way. First of all, I didn't know that there were other religions. I knew that kids were either Catholic or Public and thus went to catholic school or public schools. Those who went to catholic school went to heaven and those who went to public school went to hell. Simple as that.
I had cousins who told me that they weren't catholic. Huh? When I asked if they were public, they said no. "We are Salvation Army." I didn't know what that meant and I was a teenager before I realized that my cousins didn't work at a thrift store.
Being a gay kid in the Catholic Church was horrifying. I was reminded often of the sins of my flesh and as I grew up and was battling the truth in my own mind, having the priests and the word of God telling me I was a sinner and going to hell made life unbearable. There were many times in those days that I just wanted to end it all and just never have to deal with the guilt of my faith.
Today I am a fully functional gay man who follows no church. My daughter was raised with no church or religion in her life. she has faith, but she will never be bullied by a priest or nun to believe anything other than what feels right to her. I firmly believe that children do not need organized religion to feel complete.
Today I have a strong sense of faith. I don't think my saviour is Jesus Christ, much to the chagrin of my Mother, but if there is a Jesus Christ sitting on the other side I think he would say "Hey Jay, wassup? It's cool that you didn't believe in me. I don't blame you with all that shit that those fools down there are saying and throwing around as my words. Come on in man. Beers are in the fridge." Thanks JC, Hollah!
As humans it is in our nature to personify things. If we can't understand or see something, we put a face on it, give it a name and spread the word. I don't have a name or face on what I believe but I truly believe that my energy will someday pass on to something new. Call it what you like, that is my religion. I sometimes pray but I pray to my grandmothers that have passed or other dead relatives that I think might be listening.
I truly believe the my Mothers mom is with me a lot. She was extremely religious and we often talked about her beliefs and my disbeliefs but she loved me and laughed with me always. After she died I started noticing lights going on or off and there being a distinct connection with me suddenly through electricity. I could be driving in my car and having a hard time with something personal and talking in my head, looking for answers and suddenly the street lights will start shutting off as I drive under them. I would ask nan a question out loud and lights will go off and on. Others have been with me when this happens and it has never once been spooky. It is calming. Nan is there and I know she feels my energy and she knows I feel hers. We are as connected today as we were when she was alive.
I have no idea why I even started writing this blog but I know it certainly didn't go in the direction I was hoping. So if you are Catholic, God bless ya and there is nothing wring with it. If you are public, be proud and strong, but if you are Salvation Army, guys, come on, you can get a better job than that! xoxo
Posted by Jay B Lush at 09:20