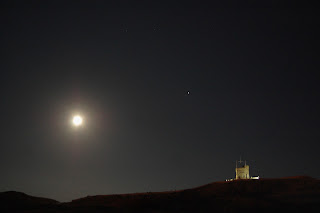 As I drove home tonight I watched the full moon rise over Signal Hill. It was awesome. It was beautiful. It was magical.
I know, in every part of the world a full moon signifies something different but for me it really is an opportunity to rush home, grab my camera and try again to get half decent picture of this phenomenon. So yet again I raced home, drove up Signal Hill and parked right in the middle of the road in attempts to digitally capture this spectacular event. The moon often rises up over the tower atop of the hill and there is often the chance to snap that perfect picture.  Again, I am disappointed with the result. They say strange things happen under the full moon and maybe my strange thing is that I can't manage to capture a decent picture of it.
Since the dawn of time, throughout the Scriptures, the Torah and traced through every culture on earth  there are myths and legends of the power of the full moon. The full moon dictates many of our holidays, including Easter and Passover. The tides reach peaks and lows over this cosmic event and if you ask any emergency room employee they will swear that the waiting rooms will be full up tonight with loons and kooks who have manage to fall victim to the power of the full moon.
According to the Native Algonquin Tribe of North America the November full moon which we are experiencing tonight is known as the "Beaver Moon." Now I find this quite ironic as I am Canadian and have the whole Beaver T=shirt blog thing going on right now.(see previous beaver blog)
Every culture and tribe on this planet seems to have some sort of symbolism or beliefs associated with the phases of the moon.
I often wonder if I am complete removed from the powers of the earth. For eons our species relied on our connection with the planets, the skies and the cosmos to evolve into the sophisticated human race that we are today. Now we can't do anything without checking our iPhones first. There was a point in our species history that our instincts were so evolved that we could smell our prey, sense a predator and react with the skills of a tiger. I mean that is how the human being became the superior species. Now when we feel that primal  instinct or gut reaction about something we take a zantac and go have a nap. How many times have we had that feeling that we should do or say something only to talk ourselves out of it and then look back and say, "I knew it." That is our instincts speaking to us. That might be our internal full moon.
I am not sure how our instincts are connected to the full moon but I am sure that people would not have written religions and myths around it if it was just a pretty picture.
So tonight on my quest to discover the power of the full moon I realized two things. The moon sure is pretty when it is full and it is friggin' cold on Signal Hill in November!
I am by far to small minded and shallow to discover anything about the full moon. It took me 20 minutes to figure out the night setting on my camera in the dark before I realized that if I had just turned around I could have used the light from the full moon to see the button on my camera. Hmmm, I might be on to something. Maybe it was that before electricity it was the only day of the month that people could see their way around and night so they held all the parties and festivals then. Sounds good to me!
Well, I feel better already... and my picture turned out pretty good after all!
Happy Beaver Moon!