Purgatory Is Full Of Babies 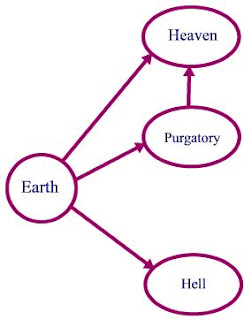 As I continue to live my life in peace and honesty, I often find myself poking back to the days of Catholic school and all that came along with a good Catholic education.
Because I have spent most of my adult life trying to forget the lessons and fables I was taught as a child I naturally and instinctively switch back into full Catholic mode the moment  hear people talk about their Catholic childhoods.
I can recite every prayer and the order in which they were said. I still know the stations of the cross and the seven deadly sins. I know that I was taught many things that I now consider child abuse but this evening as I watched The Rosie Show with Rosie and Jenny McCarthy as her guest, I had the most horrible of flashback. Purgatory and hell. I had tried so hard to forget about purgatory and hell.
As a young Catholic I was haunted by the thoughts of hell and even worse, purgatory. Purgatory was clearly full of little babies that weren't baptized in time and hell was full of killers, Hitler and other horrible people and protestants. Jews didn't go the hell, they just died and I didnt know about other religious groups back then.
I would say prayerers for my pets and my plants. I would wonder what happened when a plant would die and it wasn't baptized. I was convinced that anyone and anything that was not Catholic was doomed to a painful eternity.
It was no surprise to me tonight to see that both Jenny and Rosie, both raised in Catholic homes, had the very same fears as kids that I had.
We went to school and prayed before school, before lunch, after lunch and before we went home. We prayed the scariest and most horrying prayers and the church used the fear of God to make us good kids.
I now understand how wrong it was but I also understand why they did it. They did it because it was what their parents and churches did to them and those before them.
I chose to break that cycle. Kennedy knows no more about purgatory than she knows about heroin.
Rosie and Jenny made it sounds so funny as they reminisced about the days when the nuns would scare the evil out of them but I have not fully recovered I guess. Im still a little bitter. I hope I can get to the place where I can laugh about that crap.
Let's give it a try...

An old Irishman, McDougal, had a loyal and faithful dog who died. McDougal went to his parish priest and asked, "Father, could you say some prayers in Mass for my dog?" The old pastor said, "McDougal, you know very well that we don't pray for animals at Mass. Why don't you go down to that Baptist church and ask them? I'm sure they'll do it." "Well, ok, Father, I think I'll do just that. Oh, by the way, do you think they'll be offended if I offered them $5,000 to pray for my dog?"
Father exclaimed, "Why, McDougal, you never said your dog was Catholic!"

Go in peace to love and serve the Lord xoxo