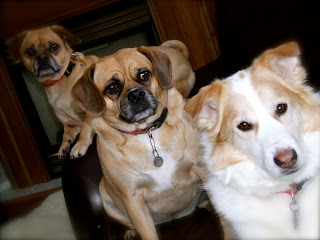 Ever notice how a gay man's dog looks at you? You know what I mean. That moment when you make eye contact with a gay mans dog and you suddenly realize that this stupid dog thinks it's better than me. Then it turns, pees on your shoes and prances off with its Burberry jacket on and Prada collar.
Why is that gay men's dogs are so friggin' pretentious. So what if they eat handmade organic food made from imported kangaroo meat from Australia. So what if they have collars that cost more than every watch you have ever owned collectively. So what if they get groomed twice as much as you see your barber. So what.
Hmm, you know what. My 3 dogs live better than most people in this world. As I speak they are laying on the favourite cowhide rug, under the heat dish which they now need like Paris Hilton needs her tanning bed. These lazy dogs are expensive and their clothes aren't getting any cheaper! Since Mabel lost 15lbs she thinks she's hot shit now. Parading around this house like she is Jennifer Hudson on some sort of Jenny Craig Commercial. These dogs are like people. Sometimes I think they are little people trapped in dog bodies.
Then one day Wally comes running down the stairs with a mouthful of cat shit from the litter box and Mabel (the hungry one) and him continue to fight over the cat shit like it is a bucket of chicken. Yeah, our dogs are no different that straight dogs. We are just stupid enough to think that pretty collars and handsome jackets makes it look like our dogs don't eat shit. But they do eat shit. In fact I remember one day when Mabel found particularly large piece of shit in the back yard, picked it up with her mouth, tossed it in the air, caught it and ate it whole in one bite. Now thats Dad's girl!
Posted by Jay B Lush at 10:12