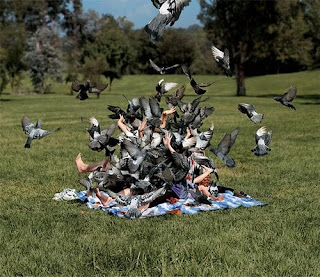 There comes a point in time when you have to deal with the truth. You have to suck it up and just deal with it. I killed a pigeon once. with my hands. That's right, I killed a pigeon on Water Street with my hands.
Now I would not call this a downright bird murder or try to defend myself by claiming that I had no intent on killing this bird but rather he was clearly suicidal and saw me as his way out of this world.
I was quite innocent, walking down the street having a smoke on my way to the Chinese Grocery Convenience Store to get a snack. Back then there was a call centre located in the building I worked in and the entire staff would come out for their smoke breaks and fill up the sidewalk around the building. They were a colourful crew of people who dressed mainly in panama bottoms and hoodies while I has dressed in my shoes that sounded like I was wearing heals. Let's just say I looked like a pretentious snot.
I knew I had to part the red sea of call centre workers in Mickey Mouse sweaters and Labatt Blue pants in order to get to the store. I strutted on through the crowd looking all fancy and pretty in my shirt and tie. Then, as I passed through the crowd looking to cool for school, I saw something through the corner of my eye.
There was a pigeon flying down toward the sidewalk that I was walking on. I hated pigeons. They carried scabies and diseases and were no doubt the cause of Bert and Ernie's break up! I just didn't like pigeons.
So as I strutted my way to the grocery I could not help but notice that the pigeon seemed to be aiming for me.  I could feel the panic set in as he began to do that "backwards wing fly thing" as he got closer and closer to me. Everything on that street was in real time but that pigeon and I had shifted into slow motion.
Let's remember that there were about 50 people standing around watching me think I was hot as shit walking down the sidewalk as this episode enfolded.
It all happened so fast. One second I was thinking he was going to miss me all together and fly over my head and then the next thing I knew there was face to face with a monster. There was a dramatic flutter and My screams were probably heard in Greenland. I completely freaked out. I acted on instinct and I acted like an animal. That stupid fucking bird must have had a bird Stroke or something to fly at my face like that.
The entire episode is a blur. I remember the burst of air caused by its scabies ridden wings. I remember screaming like a 4 year old girl as I tore the bird in two. I remember it was over. I won.
Now, there I was on Water Street after the terrible Pigeon attack of 2002, walking past the body of a dead pigeon covered in feathers and blood. I walked across that street like nothing had happened at all. I didn't even look back at what must have been the horrified faces of the workers on the sidewalk.
I started to feel bad but then I thought about it. That pigeon was clearly having some issues if he picked the only person in the world that was so afraid of him that he would kill him if he flew at him. He chose me. He was clearly committing suicide. Im a lover and not a hater but I also believe in us being able to have the right to die. Just like that pigeon.
I never said this was a nice story but I can't be the hero all of the time. This time I was the anti-hero. I was the bird killer and not the bird saver. I was the bird assisted suicide helper. yes, that is it.
Anyway, RIP gross reptile with feathers that look like gasoline. I wish I hadn't killed you but I also wish you didn't fly at my bird fearing face! FYI, this is also the reason why I don't go for walks around the lake! Just sayin'. 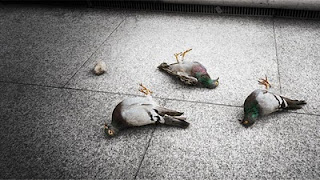