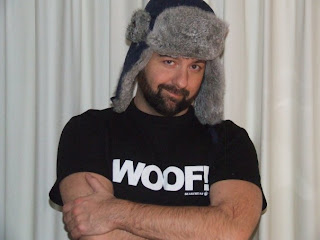 It was a few years ago that Darren and I decided to take a little Christmas shopping excursion to Toronto. He had to be there for a couple of days for work training and I decided to tag along and we took an extra few days to get some shopping done. On our very first day there we stumbled into a shop and there I saw "IT". Something that I had wanted for years but I had never been able to get my hands on an affordable one.  It was an aviator fur hat and it was lovely. I can already hear the moans coming out of the vegans and peta members but by the end of the story I'm sure you will be smiling.
So clearly as this awesome buy was a steal I snatched it up and didn't even have it bagged as I was going to wear it every day until the end of time.
That night, I put on my new hat, a pair of Darren's shoes and we decided to go downtown shopping. We walked around for what seemed to be hours dodging into this store and that shop picking up gifts for others and lots for us. I spent most of this time walking around in silence as I could not hear a thing with those fur flaps down and periodically the fur over my eyes would slip down and I would be both blind and deaf.  Regardless of the downfalls of my new fur hat I look fabulous and I knew it.
By the time we were approaching the Eaton Centre, I was hurting. I was sweating like a pig under the fur hat but couldn't take it off as my head was wet and my hair clearly soaked and flat to my head. It was clearly a mistake to wear Darren's favourite shoes as they were blistering my feet and causing my back to ache and seize from the lack of arch support.  I was a mess, there were massive crowds in Dundas Square and I could neither hear nor see what was happening. I was limping and bent over in pain as we crossed the street  to go into the Eaton Centre. Then it happened.
I was walking toward the doors of the mall, gimp legged, back aching, but looking fabulous while Darren was clearly yelling something at me that I could not hear. I could see his face and suddenly the reality of what he was saying became clear. It only took a millisecond to realize that I was standing in the middle of an Anti-Fur protest. The muffled screams and yells at me with the posters of dead seal and animals waving in my face. Oh shit, there was a dead rabbit on my head. I was in so much pain that I couldn't even run away.  Where the fuck did Darren run off to?  Seconds seemed like hours as the protesters used my beautiful new hat to draw attention to their cause and I managed to make my way through the doors of the mall and guess who was standing behind the glass laughing. Darren is often helpful in these types of situations but that evening he proved to be quite the guy.
I told him that I was humiliated and I just wanted to get the hell away from there and get some food. We descended into the food court and the tension that was in my face outside was growing more and more in my back as we approached the lower levels. By the time we got downstairs I could hardly walk. The blisters coupled with the spasms had me beginning to think I might fall down. As we walked towards the seating area I told Darren that I thought I was going to fall down. Like and episode of "Frasier" he looked at me, acted like he didn't hear me and kept walking. I fell to my knees and  palms down on the ground I was suddenly crippled in pain and could not get up. Darren walked away and looked at luggage in the luggage store while some little kids helped me to a seat. Darren eventually came over clearly impressed with his behaviour as was evident in his laughter and he asked me what the hell I was doing on the ground? I had one word for him. "Idiot." You know that day went downhill from the moment I put that hat on. I think it was cursed. I think that rabbit in some way or form haunted the wearer of that hat to endure pain, embarrassment and chronic sweating. I came home from Toronto and did what any decent person with a haunted hat would do.... I gave it to my Dad.