My Eyes! There Are Eggs In My Eyes! 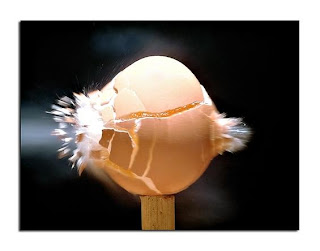 I have plenty of memories of my 20's that are sad, funny and clever but this next one is one of those stories that I replay in my mind often and every time I laugh out loud. It was also one of those moments when I question my character as I faced the life long question. Do I help or do I laugh?
There was about 6 of us laying around my friends Chrissy's apartment. The sofa, chair and floor was covered in lazy bodies focused on the TV, saying nothing really. The room full of smoke and there were a few red eyes to be seen.
Jackie, who was Chrissy's roommate decided she was going to get up and make a snack. She slowly stumbled to the kitchen in our full view, took 2 eggs out of the fridge and put them in a bowl. She looked at us and said "By's, can u put eggs in the microwave?" Now I can't speak for anyone else but I knew that your could not hard boil an egg by simply putting it into the microwave in a bowl but I found the devil come out of me as well as the rest of the crowd as there was a resounding "yes" from all of us.
You could see all of our heads begin to perk up as Jackie placed her eggs in the microwave, set her desired time and watched and waited.
It seemed like forever. I know we all where waiting for them to explode and the giggles and looks around the room made it clear. I recall Jackie asking if they might blowup. We all said "oh no."  Then came the signal. The microwave had finished cooking the eggs and they did not explode. I was a little disappointed and so was the rest of us. Jackie seemed quite proud of her self as she removed her little lunch from the microwave and proceeded to walk into the living room carrying the bowl with her freshly cooked eggs.
What happened next was one of the most spectacular sights I have ever seen and it remains one of the funniest things ever.
As Jackie stuck out her tongue to us all in a silly way and said "I knew I could put eggs in the microwave, sure I saw it on TV," the scene before my eyes moved into slow motion. At one moment she was standing there right in front of us smiling, then there came that noise. I find it hard to put that noise into words but it would be best described as the release of those cap guns when we were kids. Within a millisecond Jackie smile was covered in the guts of 2 fully cooked, microwaved eggs. The explosion sent eggs to every corner of the room but mainly to her face. She instantly dropped the bowl and began screaming, mostly from fright but her screams certainly fell on her best friends ears. Our response was clear, it was loud and it was in unison. OMG did we laugh. Jackie was laying on the floor with hot egg all over her face screaming "My eyes! There are eggs in my eyes, this isn't funny" and I proceeded to pee my pants on the sofa. The laughs did not stop within seconds or minutes. We laughed until Jackie stopped crying and she too laughed. She was fine and only her ego was slightly bruised but we laughed for days about that. Shit it has been years and I am still laughing.
So to answer the life long question, Do I help or do I laugh? I always laugh.
The residue of that lunch is probably still in the cracks and crevices of that apartment but the lingering laughter is forever. Oh, Jackie and those eggs will always be one of those moments in life that I know I will never forget. She not only made two, short-lived, eggs that day but she made memories forever for a few friends. Thanks Jackie for trying to boil eggs in the microwave. Despite your burned eyelids, I am sure that you look back at that moment in time the same way the rest of us do. You laugh, pee a little and then go make an boiled egg sandwich, on the stove!
Love you Jack! xoxo
Posted by Jay B Lush at 10:02